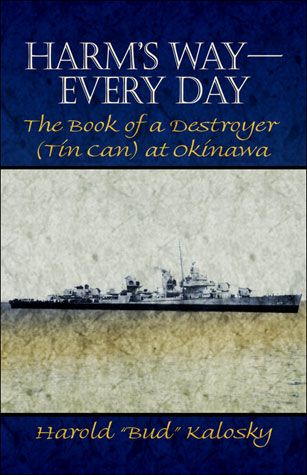 Harm's Way—Every Day: The Book of a Destroyer (Tin Can) at Okinawa by Harold "Bud" Kalosky


This book was written from the actual ship’s daily log of the USS Sproston DD 577. This log is not much unlike that of any other Tin Can that was out on the radar picket lines around the island of Okinawa from March 26 until June 30, 1945. It was an almost daily occurrence to have kamikaze suicide planes from somewhere coming in to the island or surrounding area; only heavy rains held them back. The destroyers suddenly became the first line of defense. No ships or anyone on the island knew of a plane until we told them when and from where they were approaching and how many were in the group. Reporting them to Combat Air Patrol was our primary assignment. By attacking us, it was usually over for them in a hurry, and they died happy for their emperor.

More information can be found at:  http://www.publishamerica.com/shopping/shopdisplayproducts.asp?Search=Yes